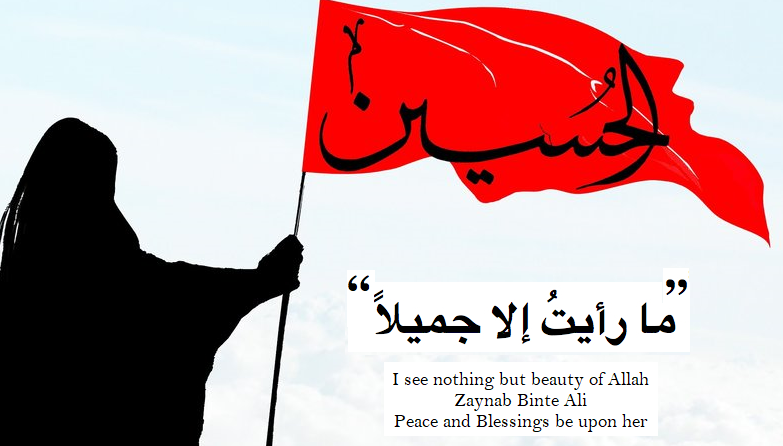 All praise is due to Allah, the Lord of the worlds

This article summarizes the thought provoking Sermon delivered by Lady Zaynab on reaching Shaam (today known as Syria) after the bloodshed that occurred in Karbala with the Household of Prophet Muhammad. To precede further let us start with first knowing who Lady Zaynab was!

Who was Lady Zaynab?

Lady Zaynab was the daughter of Imam Ali ibn Abi Talib and Hadhrat Fatimah. Her name is the combination of two words, ‘Zain’ (Adornment) and ‘Ab’ (Father), which means father’s adornment. She was the true example of determination and patience. She was flag bearer of truth after all her family members were killed in front of her eyes on the land named “Karb-o-bala”. She is an evergreen and timeless role model for all the women of the world.

She made our faith increases on the words of Allah. As Almighty Allah says,

Lady Zaynab indeed never feared anyone but Almighty Allah. She taught us that patience is the synonym of determination, not the opposite. Indeed we understand from her role that patience means standing firmly with determination on the command of Allah.

In the biggest event that took place in history, she was one of the strongest flag bearers of Islam. Lady Zaynab can actually be referred to as the back-bone of Islam. When the Household of Holy Prophet reached Shaam (today known as Syria) under the supervision of Mahaffar and Shimr along with the holy heads of martyrs, Yazid ordered his men to keep the head of Imam Husayn in front of him.

Thereafter, Yazid started to hit the lips and teeth of Imam Husayn. At this point Lady Zaynab started to deliver her speech like her father Imam Ali ibn Abi Talib.

One of the most famous sentences said by Lady Zaynab which actually described her character through the event of Karbala was her words:

“I see nothing but the beauty [of Allah]”

She started first with the remembrance of Almighty Allah,

Praise be to Allah who is the lord of the worlds and may Allah’s blessing be upon Prophet Muhammad and all the members of his family.

Then she said Almighty Allah’s words,

“Then the end of those who did evil was the worst [consequence] because they denied the signs of Allah and used to ridicule them. (Holy Qur’an, 30:10)”

It was indeed the biggest slap on the face of Yazid (Allah’s curse be on him).

She recited also another verse from Holy Qur’an:

“And let not those who disbelieve ever think that [because] We extend their time [of enjoyment] it is better for them. We only extend it for them so that they may increase in sin, and for them is a humiliating punishment. (Holy Qur’an 3:178)”

She was making it clear for Yazid that the liberty given to him by Allah was indeed a sign of excessive anger from Almighty Allah, who has only extent their period of enjoyment so that they may increase in sins and brutal punishment awaits them. As she also described the character of Yazid (Allah’s curse be on him) by mentioning that it was indeed expected from the descendent of the one who chewed on the liver of the pious and righteous people, the one who is the killer of Prophet Muhammad’s Household.

She further stated from the Holy Qur’an,

“You will reap what you have sown and will see that the almighty does not favor oppression and tyranny. (Holy Qur’an, 22:10)”

Yes, whoever submits his face in Islam to Allah while being a doer of good will have his reward with his Lord. And no fear will there be concerning them, nor will they grieve. (Holy Qur’an, 2:112)”