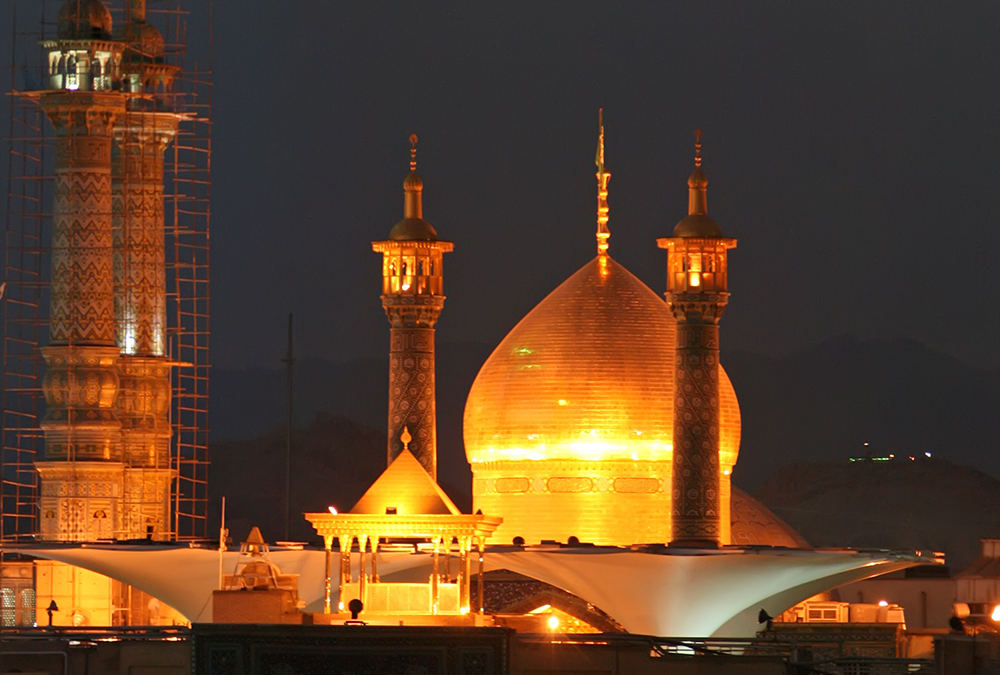 Dedication: For my most adorable Sister Zainab Fatima

The pious Lady Hazrat Fatima Masooma of Qum (a) belonged to the divine family of Holy Prophet Muhammad (S). The Blessed and most Gracious Noble Lady from the Ahlul Bayt (a) was born in Medina on 1st of Zeelqad 173 A.H.

Her parents were Baabul Hawaij Imam Musa al-Kazim (a) and Lady Al Khayzran Najma Khatoon. [1] Imam Al-Ridha (a) was her elder brother and Imam Muhammad al-Al-Taqi (a) was her nephew.

Lady Masooma was an exceptional child who exhibited her knowledge even as a little girl. A famous incident occurred when she was barely six years old. A few Shia pilgrims from Najaf, Iraq, stopped at Imam Musa al-Kazim’s (a) house in Madina to get advice regarding some theological, historical and legal questions on their way to perform Ziyarat of Prophet Muhammad (S).

However, they were unable to meet the Imam because he was out of town and expected to return a few days later. When asked why they needed to see the Imam, they said they had a few questions to which they were seeking answers and they wrote their questions and handed over to his family saying they would pick the answers on their way back from Ziyarat.

When they stopped at the Imam’s house to get the answers, they were handed their questions along with the answers although the Imam had still not returned. The pilgrims were satisfied with the answers even after finding out that it was the Imam’s six year old daughter who had addressed their concerns.

When they proceeded to return home, they met Imam Musa al-Kazim (a) on the outskirts of the city. They greeted the Imam and related the incident to him upon which he requested to see the answers his little daughter had written. He was so impressed by the accuracy of the answers that he said three times – “May your father be sacrificed on you” – a phrase Prophet Muhammad (S) had used for his beloved daughter Lady Bibi Fatima (a). This invariably makes us draw parallels between Lady Fatima (a) Masooma of Qum and Lady Bibi Fatima (a).

Hazrat Masooma (a) was a true image of her grandmother Lady Bibi Fatima (a) in her devoutness. In addition to her name, she inherited her endurance, thankfulness, zest for prayers and fasting.

The immense love of Hazrat Masooma for her brother Imam Al-Ridha (a) – enlivens the images of her great aunt Lady Bibi Zainab’s (a) love for her dear brother Imam Husain (a).

She earned the title Masooma (Infallible) from her brother Imam Ridha (a), himself a Masoom, for achieving a high status by her strong belief, virtuousness, integrity and vast knowledge and proficiency mastered from schooling under 2 Imams.

She didn’t marry and was called Mariam Aale Muhammad meaning Lady Mariam (a) of the progeny of Prophet Muhammad (S) for her excessive piety and patience thus holding a singularly exalted status by her exemplary modesty, purity, chastity and magnificence. Like Lady Mariam (a) she was a saintly, ascetic lady with total dedication to Allah (swt).

She became known as Aalimah (the Learned Lady) because of her powerful knowledge. She described the hadeeth, customs, traditions from the Prophet and his Ahlul Bayt (a). From among them, she has related from Lady Bibi Fatima (a) who has related from her father, the Messenger of Allah (swt): “Know that whoever dies with the love of Muhammad (S) and the Household of Muhammad (S) dies a martyr.”

Sayyida Masooma of Qum, the heiress to the elite family of Prophet Muhammad (S), was an incredible woman. Forty five years before her birth, her grandfather Imam Ja’far Al-Sadiq (a), predicted that a lady from his lineage will be laid to rest in the city of Qum, Iran. He further said: Haram of Allah (swt) is Mecca, Haram of Rasool Allah (S) is Madina, Haram of Imam Ali (a) is Kufa, and the Haram of Ahlul Bayt (a) will be Qum, and whoever visits her shrine in Qum will enter paradise.

She was only six years old when her father was arrested by Harun (the 6th Abbasid Caliph) and killed in prison 4 years later. Her brother Imam Al-Ridha (a), her guardian since their father’s imprisonment, continued his guardianship over her for twenty-one years.

When Mamun (the 7th Abbasid Caliph) made Imam Al-Ridha (a) leave Madina for Khurasan in Iran, he had to go alone without any of his family members and Lady Hazrat Masooma was separated from her beloved brother and guardian.

After one year, Lady Hazrat Masooma, wanting to be in close proximity to her brother and intending to help him make political decisions regarding women, left Madina for Khurasan accompanied by 23 family members – her brothers and nephews. Along the way, she was greeted by hundreds of admirers of Ahlul Bayt (a) who welcomed her as she passed their township. Like Bibi Zainab (a) earlier, who had exposed the oppression carried out against her brother Imam Husain (a), Lady Masooma informed the lovers of Ahlul Bayt (a) about the oppressed state of her brother, Imam Al-Ridha’ (a). Afraid of a revolt from the Shias, the supporters of the Abbasid regime attacked her caravan in the city of Saveh, Iran and killed all her brothers and nephews and poisoned her, ending the fragrance of this delicate flower from Prophet Muhammad’s (S) progeny in the prime of her youth.

The effect of the poison made her very ill and witnessing the onslaught on her loved ones delved her into extreme grief. No longer able to travel to Khurasan, she enquired and chose to go to Qum because she had heard from her father, Imam Musa Al-Kazim (a) that Qum was the center of Shias, the lovers of Ahlul Bayt (a). When people of Qum heard that Lady Masooma, unable to proceed to Khurasan, had expressed her desire to come to Qum, they became busy in making arrangements to receive her. She was greeted by large crowds. But she was sick and unable to recover due to the poison and after spending seventeen days in worship she died in Qum.

Per Divine Law, one Masoom is buried only by another Masoom and Lady Hazrat Masooma of Qum was alone by herself. For her burial two majestic men, believed to be Imam Al-Ridha (a) and Imam Muhammad Al-Taqi (a), miraculously approached and buried the pious noble lady where she rests today. Her dome was first built by Zaynab, the daughter of Imam Muhammad Al-Taqi (a) and because of the various miracles reported by the grace of Lady Masooma and the knowledge people acquired from her sermons the rulers of after-years constructed her shrine and kept improving upon it. Qum soon became one of the two prominent Shia seminaries – the other being in Najaf, Iraq.

In the Great Iraqi Revolution, religious leaders of Najaf who rebelled against the British Empire were expelled to Iran where they got together and developed Qum, a Shia stronghold, as the center of Shi’ite learning and authority, a preferred alternative to Najaf.

This laid the foundation of the school in excellent learning in Qum.

Najaf and Qum are focal sites of Shi’ite religious study propagating the teachings of Quran and Ahlul Bayt (a) exuding religious devotion.

Like the seminary in Najaf, the seminary in Qum, attracts scholars eager to seek knowledge in Shi’ism, from all over the world. The trained graduates, go back to their communities where they take up prominent positions helping people resolve issues in society and lead meaningful and satisfactory lives.

Although the seminaries in Najaf, Iraq and Qum, Iran are the most prominent Shia education centers, several smaller schools catering to the needs of society are present universally [2, 3, 4].

In our salutations to Lady Masooma of Qum, we pay our respects by these Vicegerents and intimates of Allah (swt):

Peace be on You, O Daughter of the Messenger of Allah (swt) Prophet Muhammad (S)!

Peace be on you, O Daughter of Lady Bibi Fatima (a) and Lady Bibi Khadijah (a)!

Peace be on you, O Daughter of the Commander of the Faithful Imam Ali (a)!

Peace be on you, O Daughter of Imam Hasan (a) and Imam Husain(a)!

Peace be on you, O Daughter of Imam Musa al-Kazim (a)!

Peace be on you, O Sister of Imam Al-Ridha (a)!

Peace be on you, O Aunt of Imam Muhammad Al-Taqi (a)!

May Allah (swt) confer His Mercy and blessings on you!