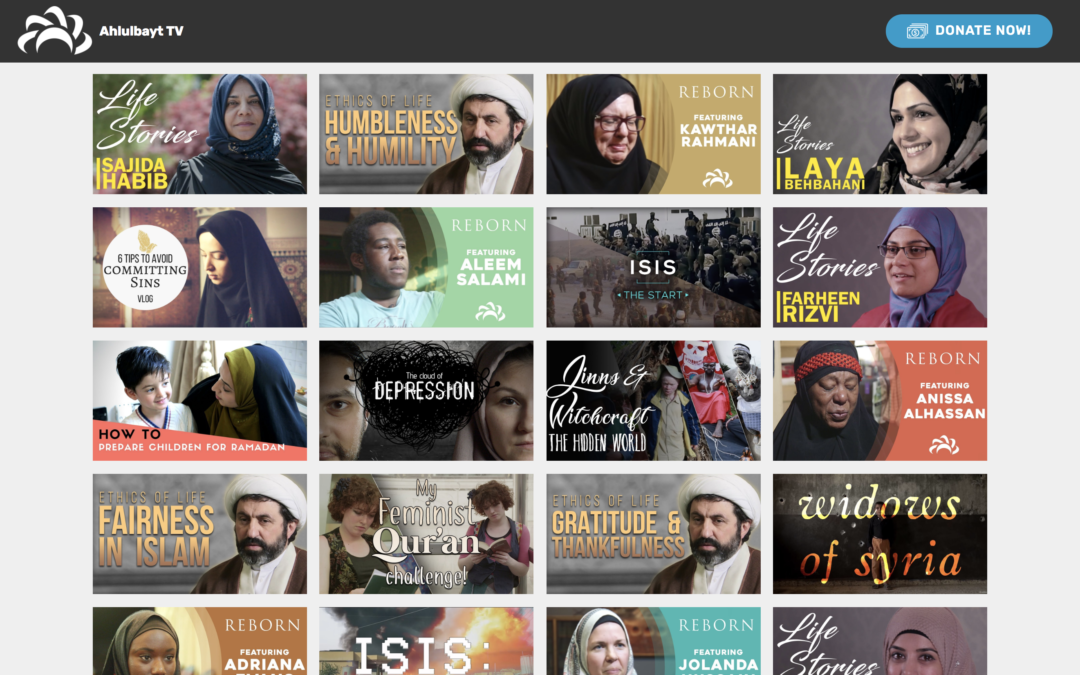 The message of Muhammad (sawws) and his holy progeny (as) lives on, and it is with the help of the countless initiatives of partisans worldwide that the School of Ahlul Bayt (as) continues to thrive. I am joined with Brother Amir Taki, founder and director of Ahlulbayt TV, who will let us in on all the details of the making of this remarkable channel.

Sahar: How did you come up with the idea to create a  dedicated to Ahlul Bayt, and what inspiration/s did you draw from to make this a reality?

Amir: Ahlulbayt TV was established in August 2009 where a team of individuals from different cultures and backgrounds came together, with the like-minded goal of promoting the message of the Ahlulbayt (as) to a western, secular world. We found that within the societies we were living in, there was more than ever a demand for a pioneering source of Islamic media – one which could connect viewers to moral messages that the Ahlulbayt (as) taught us.

With much of the 21st century challenges we face, it was more pressing than ever to offer something of benefit to the community – something which could be accessed by those even without a community. Being able to share Islamic values is critical, but the lack of English language Islamic media had inspired us to launch a channel which could also reach out to non-Muslim viewers. It is now approaching ten years on since inception, and we thank Allah (swt) for allowing this brand to flourish globally in service to the pure Masumeen (as).

Sahar: What have generally been the challenges to keep Ahlulbayt TV running?

Amir: By the grace of Allah (swt), Ahlulbayt TV has been running for nearly a decade and has continually grown and progressed in its vision, content, and coverage. We are striving to consistently improve, and can only do this with the support of the community.

As an organic, people-orientated organisation, we work to represent the people. Ahlulbayt TV does not work under any funding body or enterprise, rather it sustains expenditure through the support of individuals within the community. One challenge in recent years has been financing the growth to meet our ambitions. We would like to provide relevant and gripping content, applicable to and accessible in every corner of the world. In order to do this, we encourage viewers globally to support us with a small charitable monthly donation through our website.

Sahar: What lessons have you derived from your experience as a director and producer?

Amir: Being the Director and Executive Producer of Ahlulbayt TV has allowed me to learn much which I am grateful for. In terms of professional skills, I have gathered a keen eye for captivating and gripping productions, understanding how to create content which looks visually appealing, whilst also discussing relevant matters affecting everyday lifestyle.

Personally, I have built an array of inspiring networks, talented friends and contacts around the world. Beyond all, the greatest lesson I have learned is the one I am most indebted to Allah (swt) for. The opportunity to serve the Ahlulbayt (as) is a blessing that none should take granted for. It is never an easy task for any individual working to represent the Ahlulbayt (as), but with such great responsibility also brings abundant blessings.

Sahar: In brief, what is your primary objective in the creation and advancement of Ahlulbayt TV?

Amir: Our objective is to create cutting-edge, relevant content which can be utilised and benefitted from by communities around the world. We want to present our school of thought in a manner which is appealing and understandable to those who may not have prior knowledge of the Ahlulbayt. Moreover, we want to touch on matters concerning our daily lives – education, social affairs, taboo discussions, health and wellbeing, politics and even humanitarianism.

Sahar: What inspires you to continue with this enterprise, and what do you think has been the most rewarding?

Amir: There have been many rewarding dynamics through my role in Ahlulbayt TV, far too many to list. Some which come to mind – working with servants of the Ahlulbayt (as) who are also great working professionals, meeting people around the world who have inspiring stories to share, being able to delve into new topics of interest and create productions, are all intriguing and rewarding elements of my daily life.

If I had to identify one, the most rewarding would be knowing that there are individuals in remote parts of the world who are gaining some benefit from our work. These are people who may not have any access to Islam or a Muslim community, or those who are facing severe challenges in their personal lives and seek inspiration from work we can provide.

Sahar: Discussing topics that is often brushed under the carpet, is an outstanding feature of your channel. How has the public responded to programs targeting these ‘taboos’?

Amir: As a western based channel who has sought to do sufficient groundwork and research, we are familiar with many of the societal issues and challenges faced by different demographics of our communities. As an example – domestic abuse, does it exist within Muslim communities? Is it a matter which is addressed in Islam? What do professionals have to say about this and how can we as a channel support those going through difficult times? Another example may be gender equality, patriarchy and the rise of western feminism. What does the Quran say about gender equality? Is western feminism compatible or contradictory to Islamic morals? Should there be a discussion amongst community leaders and scholars regarding these matters?

It is critical to address matters of controversy, as opposed to avoiding them. We believe that the answers in our faith are there for those who seek them. Of course, our producers must be responsible and well versed on an issue before producing anything on it, and so, such productions usually take months of thought, planning and research before filming and final release.

Sahar: Has Ahlulbayt TV had challenges for the exposure of contentious topics? If so, how are this been dealt with?

Amir: Generally, feedback has been positive for our productions. In a recent survey, 96% of respondents stated they would recommend and share our productions with a friend or colleague from a different religious/cultural background.

There are occasionally few who inquire into the purpose of discussing such issues, but we are firm in believing that it is critical to discuss such matters in a responsible, informed and rational manner. If we were to be challenged on such matters, we would address a concern with respect and approachable means of open dialogue, as taught to us by the Ahlulbayt (as).

Sahar: What are some of the valuable lessons you’ve learned throughout your journey with Ahlulbayt TV?

Amir: I have learned that there is much to learn for those who reflect. Ponderance upon matters of theology, philosophy, spirituality and jurisprudence are critical to understand our faith. Beyond this, delving into social dynamics and constructs will allow us to effectively understand the world we live in. Finally, there is much to learn from examples of unique individuals around the world. Each human embarks upon a unique journey and gives us all an opportunity to learn and grow.

Sahar: What is the process of introducing new programs on Ahlulbayt TV? How long does it generally take to negotiate with team members?

Amir: Many of the departments within Ahlulbayt TV are interlinked. When it comes to production, we have a team of documentary and TV show producers. We also have editors, filmographers, graphic designers, technicians and schedulers.

Our team of producers sit fortnightly to discuss new production ideas, or productions which are already in progress for updates and review. Documentaries vary on timescale, depending on whether they are large scale or international projects (6-12 months). Locally produced documentaries usually take between 3-6 months. Documentaries or shows are also occasionally sponsored by individuals or co-produced with any group we are working with, for example, a charity organisation we may be filming.

Once an idea is formalised, a producer will take on board the project as their own. They will research, find key questions to address, script, coordinate filming with the camera team, work with editors to finalise the first draft, and then present to myself and the other producers for final review. Once the production has the green light, we will schedule for TV release, and work with the digital marketing team for online release.

Sahar: Since Ahlulbayt TV has a very broad appeal, has it been difficult to accommodate the interests of all viewers? If not, what have you done to ensure a satisfying viewing experience for all your audiences?

Amir: Accumulating over 15 million online viewers worldwide every year has meant that we have concocted a formula which works to appeal to different demographics. It can be difficult to find the right balance, but having a team of 7-8 producers, each with a different focus and expertise has meant that we can touch on the right topics to address.

When engaging in matters of Islamic affairs, we work to produce and script in such a way that this can be digested by any viewer, from any background – presented in a formal and academic manner. This means that there is minimal confusion and terminology or religious themes which are used are always referenced.

When producing lifestyle shows, e.g. mental health awareness, cooking, or other shows, it becomes far easier, as these are topics which all can relate to. We always work to produce to the highest standard, within the capabilities of our resources.

Sahar: The programs on your channel range from historical accounts of holy personage within Islam, to providing guides to lead an Islamic life in this modern era. Has it been difficult to establish a link between history and today, and if so, how do you overcome this obstacle?

Amir: Islam itself is a timeless faith, and the core message presented by the Ahlulbayt (as) maintain a theme of contemporary significance. This means that naturally, when discussing historical accounts within an Islamic context, we work to bring relevance to a 21st century secularist society.

As we know, Allah (swt) says in Quran 59:21, “And these examples We present to the people that perhaps they will give thought.”, inferring that we must reflect upon history and bring about its relevance to a present day context.

Sahar: What advice would you give to this generation’s youth wishing to serve Ahlul Bayt (as) through digital projects like Ahlulbayt TV?

Amir: We must equip ourselves with the knowledge taught to us by the Ahlulbayt (as). As we know, when an atheist asked Rassulallah (saw) what Islam actually means, he responded, “To serve the Creator and be of benefit to the creation – and the best of people are those who are the most beneficial to the creation.” This should be an intention of our youth – to be sincere in our worship to Allah (swt) whilst also being able to serve the wider community.

The world we reside in is globalising and advancing technologically. There is a rise in populism and sensationalisation, and is important, now more than ever, to be able to utilise means of digital media for the right purposes.

I would humbly advise the youth of the community to be honest in your intentions, be ambitious in achieving and spreading goodness, and finally, to contribute towards the growth of positive media – in any way, shape or form.