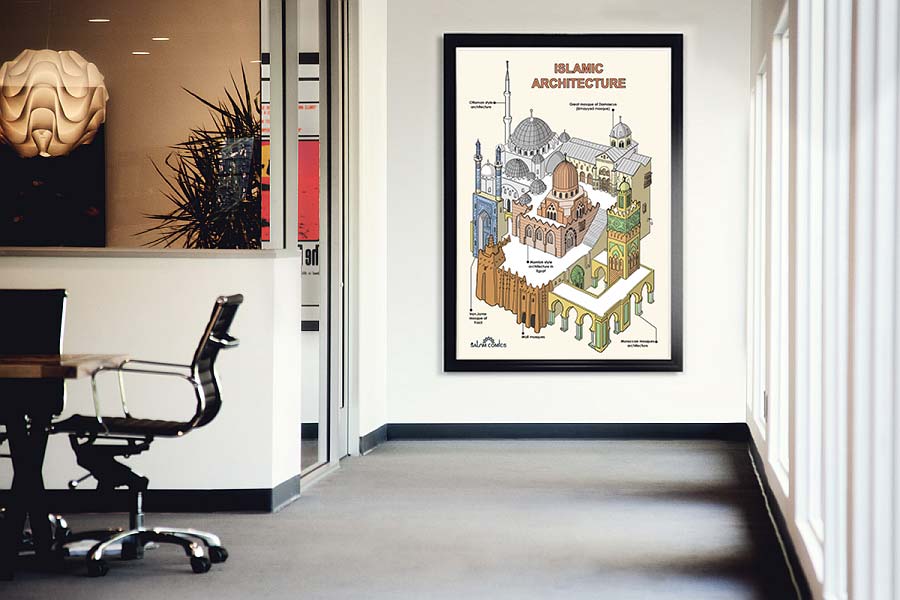 SalamComics is a successful and continuous project of creative designers collaborating to combine contemporary art and architecture with traditional Islamic values. Through the production of an array of Islamic artworks and posters, SalamComics has left many people enthralled. Founder and CEO Mahdi Tabatabaie Yazdi shares with us some of the challenges, rewards and behind-the-scenes into this unique initiative.

Sahar: I have realised that the work on SalamComics aims to depict Islamic values in a modern way, whilst still adhering to Islamic tradition. How do you make the balance between modernity and tradition?

Mahdi: I don’t think there is any contradiction between everything that is modern with our Islamic values, but the point is that we cannot deny that we have sharia with some red lines and I think that some of us cross these lines while others become too conservative. The best way is that stay in the middle, and this is what true Islam ordains us to do, as the Quran says:

Sahar: What inspired you to start this enterprise?

Mahdi: We were looking for new methods of educational materials for our Muslim community. We see that we are in a world full of images, entertainment and fun and many Muslims are attracted to this (creative) industry. Although Islamic products are growing, we still need more and more graphic products for our community.  One of our posters audience told us that she has seen lots of illustrations and graphics for children but was surprised to see how these posters can work for teenagers and Muslim youth, since there is a lack of this kind of content in the market.

Another reason that inspired us to commence this work is the fact that we are bombarded by the news about extremists who call themselves Muslim and a lot of misunderstanding and Islamophobic views are growing all over the world. Even in these tough situations, art can be a language that brings smile and enjoyment on people’s faces. So, in our journey we also had many non-Muslims attracted to our work.

Sahar: What has been the biggest challenge for you and your team?

Mahdi: Our biggest challenge is the fact that working with the Quran places a very high responsibility on us to to be close to the Quran and Islam, as the Quran says:

We should be very careful about purifying our deeds when we are working with the Quran. If we stray from Quranic values Allah take the towfiq (success) away from us.

Sahar: The intricacy in the illustrations of SalamComics is remarkable. How long does it take to formulate new ideas and bring them to life through drawing?

Mahdi: It takes us between one week to one month. The ideas come suddenly, but there is a lot of research done before it.

Mahdi: I have attached some of them. 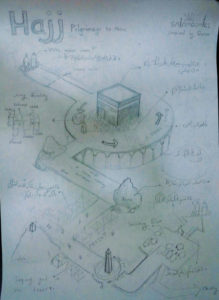 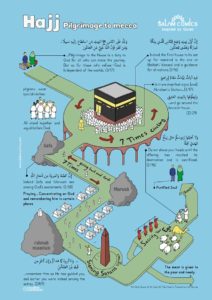 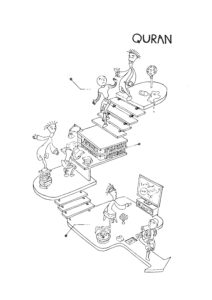 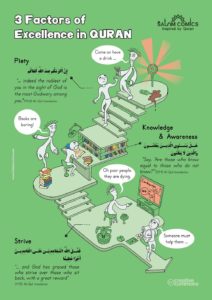 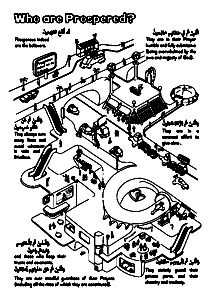 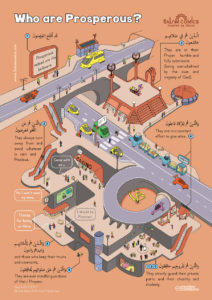 Sahar: What is your process for creating these posters?

Mahdi: Firstly, we have a basic concept. We then do lots of research in Quran and tafsir and do some sketches, but after that is the hardest part: illustrating and finalizing the poster.

Sahar: Has it been difficult to constantly produce new, creative and modern work? If so, how do you tackle this problem?

Mahdi: Not really, because we only created seven posters using this new method, so we have lots of concepts to work with. For example, our next poster will involve gathering all the verses of Quran about modesty and hijab.

Sahar: Which direction do you see SalamComics heading in the near future?

Mahdi: Well, we are doing a crowdfunding campaign for our Quran educational posters and we are going to create twelve posters in this style for the next twelve months. At the same time, our team accepts orders for children book illustrations. Another project that we are doing research for is a concept of a comic book with Muslim characters with lots of entertainment and, at the same time, presenting islamic values.

Sahar: What do you think is SalamComics’ biggest accomplishment thus far?

Mahdi: Our biggest accomplishment would be the creation of lots of Islamic education concepts, books and comics to inspire other artists to produce artistic Islamic content.

Sahar:  What has been the feedback from the Muslim community and people of other faiths?

Mahdi: Most of them were positive. Our hajj poster was the most popular poster. In terms of non-Muslims, we recently had done an interview with a Christian artist, and I’m sure the article will be interesting for you. This is the link:

Sahar: The drawings in the ‘Quran poster’ category are architectural. What is the aim of this?

Mahdi: To be honest, I have a bachelor’s degree in Architecture and this had influenced me. But, at the same time, I was looking for a new method.

Sahar: What motivates you to persevere in this initiative?

Mahdi:  I think I should continue this method because of the positive feedback I’ve gotten. I’m still running my crowdfunding campaign and we have gained about 77 percent of the funds, so they pre ordered twelve posters for the next twelve months. This is the link for our crowdfunding campaign – we still need 23% of our funds for a successful kickstart:

Be sure to check out the official website of SalamComics at www.salamcomics.com