Hajj: The Philosophy and Purpose 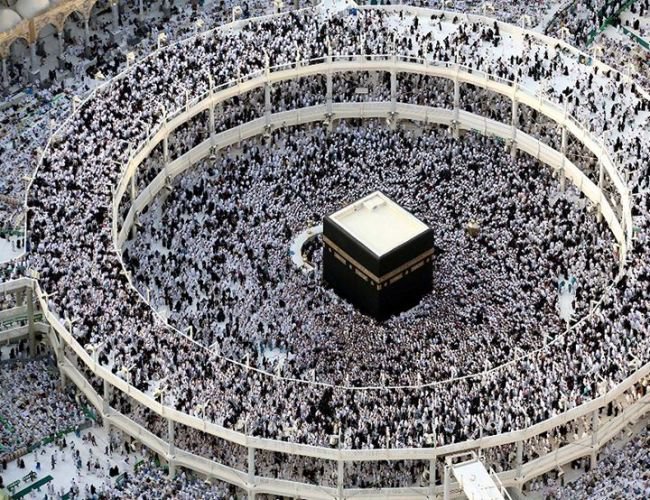 “And proclaim among men the pilgrimage; they will come to you on foot and on every lean camel, coming from every remote path, that they may witness advantages for them and mention the name of Allah during stated days. (The holy Quran; 22:27)”

Imam ‘Ali Ibn Abi Talib (AS) has said, “By Allah, by Allah, keep the House of your Lord in mind.  Do not disregard it as long as you remain (alive) because surely if it is ignored, then He shall not look towards you (with His Mercy).”

The Hajj is not only among the obligatory pilgrimage which all capable Muslims are required to perform but also is the most complete form of worship which includes all other types worship as part of itself. The verse 27th of Sura Hajj and the above-mentioned saying of Imam Ali(AS) underline the importance of Hajj in Islam. Those who feel the warmth of faith in their hearts and those who truly love Allah (SWT) and long to be in the most sacred place on earth designated as His house, rush to the holy city of Mecca for performing the Hajj. They bear the hardships of travel, sacrifice the comfort of their homes, endure the discomfort of staying in a desert, all this to please their Creator, Lord.

What is the purpose behind Hajj? What is the philosophy of Hajj? What are effects of performing Hajj on different aspects of life? we’ll discuss these questions with the help of following books:

Sayyid Muhammad Zia Abadi in his book Hajj – The Islamic Pilgrimage explains the philosophy and effects of Hajj eloquently:

Spiritual journey and affinity with God are some of the advantages of Hajj. The light of God’s guidance illuminates susceptible hearts, making them detached from the earth and attached to God. By putting on Ihram, saying Labbayk, circumambulating the House, offering sacrifice, and doing other acts of worship, man’s heart goes through a spiritual stage.

Only does God know how many averted hearts have become fond of Him in this Sacred House and how many misled men have become pious and heavenly thanks to the blessings of this holy place.

…..The external feature of the Hajj rites represents a spiritual journey of a perfect man who has gone through different stages of servitude, detached from worldly ties and ornaments, and rescued from darkness and entered into the illuminated kingdom of God. Therefore, a true Hajj is an evolution in the soul. It is not a plaything or entertainment as some ignorant people think, for their performance is more like a game than worship.

One year, I accompanied Imam Sadiq (as) in the Hajj pilgrimage. Being on the back of his horse and in the state of Ihram, the Imam (as) was trying to utter ‘Labbayk’ but his voice stuck in his throat. He therefore rode off his horse.
I said:“O son of the Messenger of Allah! Say ‘Labbayk’, you have to say it.”
He (as) replied: “O son of Abi-Amir, how dare I say it? I fear that Allah will not answer me nor let me in.”

Ayatullah Jafar Subhani in his book on Wahabism discusses the Political and Social Dimensions of Hajj “The aim of performing Hajj duties is to call for humility before God and this matter is clear and apparent by paying attention to the Hajj rituals.

‘Ibada and worship of the Lord and non-worship of other than Him is evident right from the beginning of the deeds until the last of them and it is needless to mention them, especially if these actions are accompanied with recommended prayers. We derive the following conclusions from all such deeds:

Hajj is ‘ibada and worship of the true Lord in the best possible circumstances.

Hajj is expressing humility with honour before God in the best form.

Hajj is beseeching and weeping before God in its deepest form.

Hajj is such an ‘ibada where all kinds of elements of expression of devotion and bondage have been collected, and one can clearly witness humility, submission, piety, deliverance from desires and attachments of this world.

The pilgrims to the House of Allah exhibit their liberation from material manifestations by wearing two pieces of clothes and in this way, show that except for Allah, they have no interest in anything even to their sons, family, and relatives. The only thing which preoccupies the minds of the pilgrims to the House of Allah is the saying of labbayk in one harmonious voice.

This matter is entirely evident and clear by paying attention to the obligatory acts of Hajj, the places where these acts are to be performed and the stops where the pilgrims have to make a halt. Therefore, one should consider Hajj to be the greatest devotional act and the greatest religious obligation.

However, apart from this matter, there is another matter to be looked into and that is whether this act, apart from ‘ibada, has any political and social dimensions or not? Or is it that, like the midnight prayers, it ends only and only in Ibadat and worship without having any relation with the common Islamic problems!……Yes, this great divine Congress where the representatives of every nation gather is the best opportunity for the intellectuals amongst them to come together and discuss their political and defensive matters and form a united row before the enemies and teach them an unforgettable lesson. Even though this duty is not confined to the time and place of Hajj and rather the Muslims should face the enemies under any given situation and time, yet the time of Hajj and the gathering of Muslims at that place is the best opportunity for fulfilling this divine obligation.”

Ayatullah Sayyid Abdul Husayn Dastghaib Shirazi in his book Greater Sins Volume 3 provides Reasons why Hajj is made Obligatory “The traditions of Ahl ul-Bayt (a.s.) mention the reasons for making Hajj obligatory. The traditions also explain the significance and wisdom underlying each of the rituals.

In Wasa’il ul-Shia is a tradition by Imam Riďa (a.s.), in which the Imam (a.s.) says that Hajj is made incumbent so that people may derive the spiritual and material benefits inherent in it. Some advantages of Hajj are as follows:

Hajj is a unique occasion, to present yourself humbly before the Almighty and devote yourself entirely to Him to gain His pleasure and seek nearness to Him. It is an occasion for you to set aside all your worldly cares and concerns and immerse yourself entirely in worshipping your creator and carrying out His commands. For this you deny yourself worldly pleasures and comfort, face hardships and the vagaries of nature. Your sincere efforts in fulfilling the obligations of Hajj are rewarded with Allah (S.w.T.)’s pleasure and nearness to Him; untold bounties for this world as well as the hereafter; your repentance is accepted and your sins were forgiven; your supplications are granted, this is a special divine favour for individuals who are part of a large gathering at a single place.

Besides Hajj is a unique opportunity for Muslims in general, from all over the world. It provides a common ground for interaction between Muslims of different countries at various levels. Individuals benefit financially be they traders, suppliers, retailers or hirers or beggars and destitute who receive alms.

People of one country get first-hand information of the situations prevailing in other Muslim countries. Such interaction brings awareness of the problems and difficulties faced by your brother Muslim and perhaps open avenues for extending help.”

Ayatullah Muhammadi Rayshahri in his book “Mizan al-Hikmah (Scale of Wisdom)” under the chapter on The Pilgrimage (Hajj) mentions the sayings from Infallibles (AS) about the philosophy of Hajj :

“Imam Ali (a.s.) said, ‘And He made obligatory for you the pilgrimage to His Sacred House which he made the ‘qibla’ for all people. They come to it like the cattle coming to water, and eagerly turn to it like the birds eagerly returning to their nest; He, glory be to Him, made it a sign of their humility before His greatness and their yielding to His Might.’[Nahjul Balaghah, Sermon 1]

Imam Zayn al-Abidin (a.s.) said, ‘Perform the Hajj [obligatory pilgrimage] and the ‘umra [voluntary pilgrimage] so that your bodies become healthy, your sustenance expanded, and your faith improved; and suffice yourselves with the expenses of people and the expenses of your families.’[Thawab al-A’amal, p. 70, no. 3]

Imam al-Sadiq (a.s.) said, ‘There is no place dearer to Allah, most High, than the mas’aa [place of running between the mounts of al-Safa and al-Marwa in Makkah], for every overbearing person is lowered and debased before Him there.’[Bihar al-Anwar, v. 99. p. 45, no. 34]

Imam Ar-Ridha’ (a.s.) said, ‘If someone asks why He commanded the pilgrimage, it is answered: in order for people to perform the journey to [i.e. for] Allah, Mighty and Exalted, and ask for increase… in addition to the benefits it has of understanding religion and relating the reports of the Imams (a.s.) to every side and region.’[‘Uyun Akhbar ar-Ridha, v. 2, p. 119, no. 1]”

Ayatullah Muhammadi Rayshahri in his book The Elixir of Love in the chapter The Hajj of the Friends of God mentions The Mysteries of Hajj in the Sayings of Imam Khomeini (ra) : “Repeatedly uttering Labbayk is true for those who have heard the call of God by the ear of their soul and are responding to the call from Allah the Almighty by (His) comprehensive Name. It is the issue of being present in the Presence and witnessing the Beauty of the Beloved, as though the chanter (of Labbayk) has at this moment lost to himself and repeats the response to the call followed by denying association (with other than God) in the absolute sense of the word, (and) not simply association with Divinity, which is known to the devotees of God; although denying association in that includes all stages up to the annihilation of the world in the view of the people of knowledge and contains the entire cautionary and preferential issues. For instance, “alhamd laka wa’ lni ‘ma laka. ..” dedicates hamd as well as the ni’ma to the Sacred Essence (of God) and denies association. This, to the people of knowledge, is the ultimate in monotheism, i. e., any praise (hamd) and blessing (ni’ma) that occur in the word is a praise to God and a blessing of God without association (with other than God). This high object prevails at every mawqif (station) and mash’ar (place of religious ritual), every stopping and moving, and every rest and action. Opposing to it means association in general, which we, the blind- hearted ones, are all suffering from ”

Let’s finish with the supplication that may Allah (SWT) inspire us with the correct understanding of Hajj and make all of us perform this great obligatory pilgrimage and make our Hajj worthy of His acceptance!