Husayn, The Ark Of Survival 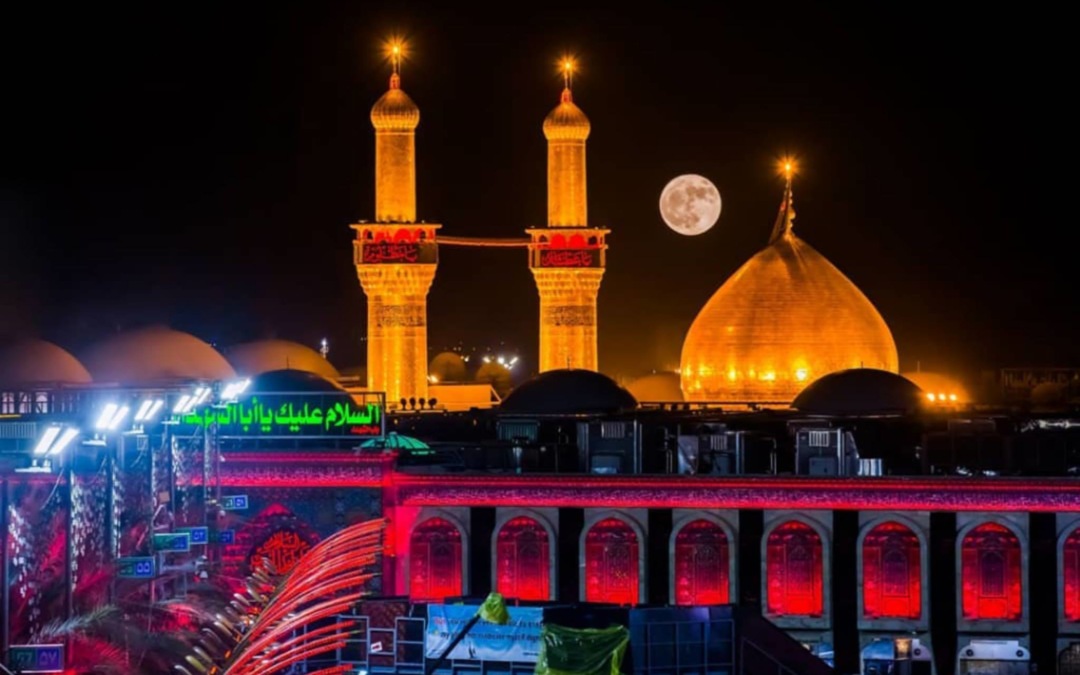 “Indeed, Husayn is the beacon of guidance and the ark of salvation.”

Imam Husayn (as) is a love regenerating, does not concern within a day or a month, nor a year, yet it will remain a heated candle in his beloveds’ heart to lighten his path. Love entered Karbala as an orphan, lonely, unique, confused, lost and dispersed. And he graduated from Karbala by Aba-Abdallah’s (as) hands, a master with the rank of divine love.

Imam Husayn (as) gave us lesson about love. But, are there lovers?

A question rises up to some fool minds that my hands feel ashamed to write. Is Imam Husayn (as) in need of us or in need of weeping over him? Is he in need of our visitation to his grave? No and a thousand no!

If we only reconsider the history and read about the reward and the wage of the lamenter over Imam Husayn (as), we will stand thankful to Allah for this grace. Yet alone we should be thankful to Allah for introducing this merciful Imam to us that taught us how to approach the true felicity and happiness throughout his love and satisfaction.

Imam Husayn (as) had shown by his acts as well as his various discourses during the seven days of Muharram at Karbala, that this conflict was much more universal in nature, and that he knew he was going to live forever through his martyrdom.

Yazid died as uselessly as he lived; only three years after the battle of Karbala took place. While trying to race a baboon, he fell from his horse and broke his neck. As history has recorded, those who were apparent victors at Karbala (as) have disappeared without trace.

If we widen the eye of our hearts, we slowly observe a tired caravan arriving. If you open the ear of your heart you hear them; they’ve come very near. They’re arriving to that land that had a secret for itself. All the angels, prophets, cried and wept over.

Since Prophet Adam (peace be upon him) the talk regarding Karbala began, the calamities of the `sibt` of the prophet peace and blessings upon him and his family was told. Now Imam Husayn (as) wants to arrive to that land and say to his Zainab, his Umm Kulthum, to his surroundings be prepared for the tragedy, for the warmth.

The path of guidance is a road full of thorns and ups & downs which requires a beacon for one to reach its destination. Imam al-Husayn (as) was sent as a blessing to perform this mission and become a light that leads us to the satisfaction of Allah and his messenger. The world is unable to present an example finer and brighter than the personality of imam Husayn (as). He was and will be the embodiment of love, valour and personification of sacrifice and devotion which every Muslim should seek guidance from.

“I have left the entire world for the sake of you

And I have orphaned my children so that I see you

So, if I’m cut into pieces for your love

My heart would lean to none other than you”

Imam Husayn (as) expresses his sincere love for his creature throughout this heart touching poem. He submits the accurate definition of love by the steps he took to show us how absolutely wholeheartedly each individual must be towards his Lord.

Are we ready to leave the entire world for the sake of Allah?

Am I a true lover that even if cut into pieces my heart would lean to none other than my beloved?

Those words of wisdom and eloquence mirror the great personality of this virtues Imam. Imam Husayn gave his heart to Allah, so Allah gave millions of hearts back to Husayn (as).

Do not underestimate the worth of those tears which are shed in the remembrance of Aba Abdillah al Husayn (as), For those very tears can mend the hearts of every sorrowful men and women, and reunite even the most unworthy servant with his lord.

Look at the Seventy-two martyrs in Karbala.

What a regretful feeling they’ve left in the heart of the world and the believers?!

Still, there is a chance…

“Hurry toward the best of deeds”.

Three hundred and three humans will be like rose flowers

Strive to be among them,

Amongst the lonely imam, Al-Mahdi (aj).