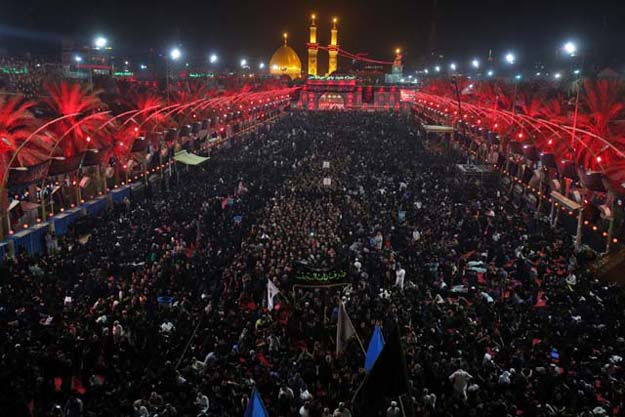 Muharram, the first month of an Islamic calendar, month of grief/sorrow.

A month based on remembrance of what transpired with Imam Hussein (ع) and his close family members and companions. We recite their tragedies, their pain/sorrow and betrayal of people of Kufa.

We read Ziarat Ashura to express our hate for the betrayers and this made me ponder over that what is the concept of “لعن” /“Curse” in Islam.

“That Hussain will be left alone.”

(Above lines, sounds best when spoken in Persian)

And I thought! Really??

We will not leave alone the Imam of our time! Curse has no meaning other than words of curse spoken! Does God need our words to punish bad people? Is the actual meaning to curse bad people is only to send them to Hell?

The people of “Kufa (Iraq)” or the people who did not support Imam were created bad?

A thought clicked my mind. As I can related with Qu’ran that narrations of so many stories from past were for iberat too. May be through curse, almighty wants to make our conscience alive to stop us from being one of them.

From there I started to think what made people of city named “Kufa” did not support our Imam. What made them betray the Imam of their own time? Why did “Ibn Muljim”, a close companion of Imam Ali, killed him? Why in spite of knowing the facts, only approximately 72 people came forward to support Imam Hussein ع?

“The supporters of Hadrat al-Qa’im (‘a) will be three hundred and thirteen persons who will be from the children of the a‘jam (non-Arabs).”

Why is that until today the 313 companions are not ready? If we look into past, we ponder why the maximum number of true and loyal companions available for any Imam were only 72? If seeing Imams is the best guidance then why many of those who saw Imams were not guided?

Aren’t so many questions misleading us? No. A famous book named “Start with Why: How Great Leaders Inspire Everyone to Take Action” by Simon Sinok is the first step towards excellence. Having questions does not mean having doubts but alive conscience.

For example, we all know food consists of a set of edibles together which are all separately needed by our body, but what if we limit our self to only one item? Similarly, what if we only focus on mourning and not the message? Mourning is “a part of Muharram” not “is Muharram”.

Mourning is a part of Muharram not complete Muharram. Can’t we think deeper into the fact that why a person will give up all his family just to make us all cry?

We all wish and pray to be with our 12th Imam and support him, however this requires effective thinking, a thought process that helps us in understanding the reasons that why people betrayed our Leaders/Imams in past and a heart to acknowledge our weakness and to work on them, so that we can make a difference in present and future.

We all have the urge to call out Labbayk to Imam but we must remember that Qur’an also tells us that “The Iblees, ابلیس”, “The Nafs e Ammara, نفس اماره” and our own sins are our open enemies to mislead us from Straight Path.

“…Indeed the nafs that overwhelmingly commands a person to do sin”(12:53)

Some of the reasons which lead to betrayal of people in the past who thought they were with Imam but indeed failed this trial were:

This can be explained through a big incident of Islamic history. For example,

“Umar ibn Sa’ad was a bad soul because he did not support Imam of his time due to his desire for earning the authority and ruler ship of the land of Ray. We all have something similar to the ruler ship of Ray in our lives which represents are peak of desire and that may be money, gold, self-importance or anything we can think off. In our daily life, we at some point ignore God’s words just to satisfy our own self i.e. our Nafs نفس.

Few other examples to understand better and deeper.

We all are aware of the fact that “Ibn Muljim” killed Imam Ali because the lady whom he loved asked him to do so. They were not born bad but they got astray because of wrong selections/decisions they took because of weakness of their own souls. God does not weaken our souls but we do it through our own sins. These are the diseases of soul which must be cured to answer the call of “Hal Min Nasirin Yansurna / Is there anyone to help?”

If we have any characteristics mentioned above then it’s high time to wake up because indeed the alarm of appearance will ring any moment, inshallah.

Let’s also study a positive example. We hold our own destiny and Hazrat Hurr proved it on the night of 9th Muharram by leaving the camp of Yazid and joining Imam Hussein (as). God guided him because he did not kill his conscience. Hence we understand that every second we need to remind our self that this world is an illusion and our aim is to prepare our self for the arrival of the Soul Savior (12th Imam, Imam Al- Mahdi, aj). Realization of the disease is half of the treatment.

Studying the characteristics of those who did and did not support Imams may help us in our approach to be among 313.

In conclusion, God does not create bad people.

The question is how much we are ready to be guided, preparing for the reappearance of the Living Imam and working to achieve our self-purification.

We can ask as many questions as possible not with an intention to argue but to understand.

Intention cannot be judged by anyone but Allah.

Do not despair of the mercy of Allah. Indeed, Allah forgives all sins, for He has said in the Holy Qur’an:

“Allah would not leave the believers in that [state] you are in [presently] until He separates the evil from the good. Nor would Allah reveal to you the unseen. But [instead], Allah chooses of His messengers whom He wills, so believe in Allah and His messengers. And if you believe and fear Him, then for you is a great reward.” (3:179)