Muharram The Month Of Revolution 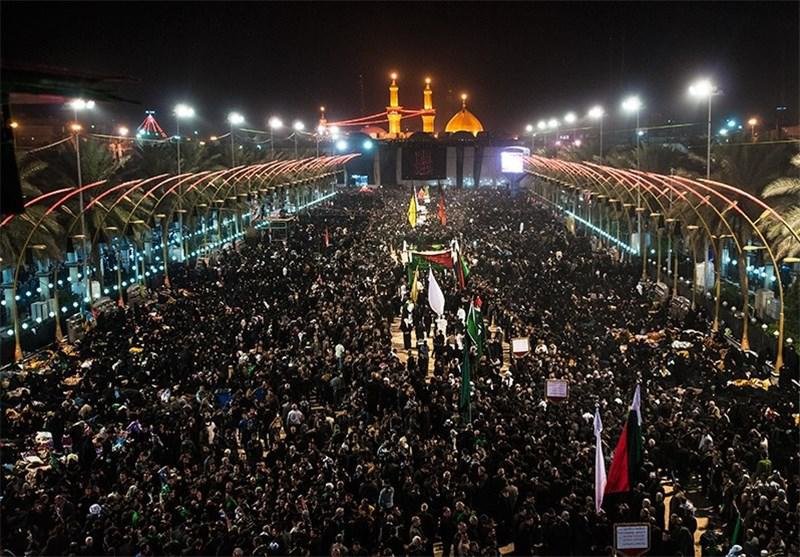 Although a revolution is a fundamental change in power or organizational structure that takes place in a relatively short period of time we are applying the term to an Islamic month that carries in its fold the immortal message of Imam Husain a.s. because of the great awareness it brings in our everyday life.  Every sip of water we drink brings to our mind the picture of our little prince, Ali Asghar a.s. who was the youngest soldier of Imam Husain’s a.s.’s mission and contributed to the event that culminated on the 10th of Muharram [1].

The revolution that took place in retaliation to duress and oppression in the month of Muharram, under the Imamate(divine leadership) of Imam Husain a.s. left the warm light of Islam turned on for everyone to accept, whenever they felt compelled to find the ultimate truth.  Imam Husain a.s. has burned a lamp that draws us to it and provides the feeling of connection with God in its engulfing warmth.  It is a revolution that gains more momentum with time.  As more and more people realize its significance and get drawn to it they experience the peace they were in search of and feel their quest for truth has been answered.  This emotional satisfaction is an outcome of the love they receive through the doors of Imam Husain a.s. which are forever open welcoming each one of us to connect to Allah swt just like he went to the side of every martyr of Karbala and held him close to his self during the last moments of their lives.

Imam Husain a.s. learned Islam from his grandfather – the one who received the Holy Quran on his heart, his father – the epitome of knowledge in the Prophet’s mission and his mother who was also called Zakiyah – the knowledgeable.  He represented the true living spirit of Islam.  When unnecessary and unwanted changes were being incorporated into Islam, Imam Husain a.s. was duty-bound to bring it back into its original form.  This called for a revolution because Imam Husain a.s. was conscious of the wrong and he knew that he was the only one who could correct the wrong because he was accurately aware of the extent to which the wrong had taken place [2].  When Imam Husain a.s. was given no choice but to give allegiance to a tyrant and an infidel enemy of Islam or face death, he took a few members of his family – including women and children and left Madinah towards Makkah.  While in respite, he aspired to perform Haj.  His peace did not last long and when the enemy plotted to kill him while performing Haj, Imam Husain a.s. performed Umrah instead of Haj to preserve the sanctity of the Holy Kaaba.  Since Makkah had also become unsafe for him, he accepted the invitation of Kufans and left Makkah for Kufah.  His family accepted Imam Husain a.s.’s divine decision with solidarity [3].  His brave and obedient brother Abbas a.s. suppressed his anguish and obeyed Imam Husain a.s.’s command to avoid bloodshed at the Holy Kaaba and give in to the compelling demand of the enemy to leave Makkah without performing Haj.

When Imam Husain a.s. learned that Yazid’s forces had assembled in Kufah and were waiting to assassinate him, he changed direction to go back towards Madinah.  Hurr a.s.’s army obstructed Imam Husain a.s. from returning to Madinah.  Not wanting to go to Kufah and unable to go to Madinah, Imam Husain a.s. moved in the direction towards Karbala.  There, he was besieged and the supply of food and water to his camps was cut off.  His family – consisting of infants, children, women and nursing mothers suffered hunger and thirst for three days in the extreme heat in the desert of Karbala.  Imam Husain a.s. requested everyone to leave him and save their lives for staying with him would mean certain death.  On the day of Ashura, he began to lose one companion after another.  After his small company of seventy two was killed in the matter of a few hours, and he had participated in the agony and death of every companion, he offered his thanks to Allah swt in prostration in complete submission and attained martyrdom [ 4].

In Muharram, our beloved Imam Husain a.s. set an example for us to conquer oppression in a way that weapons were not needed to be victorious.  He vanquished falsehood with truth creating history which only gets more relevant with passage of time because new depth is displayed in the character of Imam Husain a.s. each time it is closely examined.  The success of Imam Husain’s mission is manifold and multifaceted.

The humanitarian sacrifice of our Prophet’s beloved grandson is intense, immense, incomparable, invaluable and impassable to any event in the history of this world.  In a matter of few short months after he left his home in Madinah, Imam Husain a.s. contentedly offered all he had – including his family, his followers, his footing, in the way of Allah swt.  Imam Husain a.s. was a unique revolutionist.  The noteworthy revolutions include the revolution of colored people against whites in the 1790s and the Iranian revolution in the 1970s, which reformed the society, as well as all revolutions in between are a reawakening after Islam had prohibited slavery and set the standard for leading a blissful life centuries ago.  However, there was no reformer like Imam Husain a.s. who brought changes that will last until the very last day of the existence of this world.

The incarnate truth was revealed by the Holy Quran al Karim, brought to us by the message of our Holy Prophet sas who, by example, taught the believers how to live a truthful and sanctified life.  He invited the people to one God – Allah swt.  He explained the verses from the Holy Quran as they were brought to him by Gibrail a.s.  A lifetime’s dedication of Prophet Mohammad sas for the cause of Islam was being eliminated by the changes being brought to the religion by the rulers after the Prophet sas.  These changes hurt the soul of spiritual freedom which is the essence of Islam.  They worked against truth and the preaching and principles of the Prophet sas and favored the corrupt rulers.

When Islam was being modified from the inside to suit the political greed and shortcomings of the rulers, the true custodian of Islam set up his defense to protect Islam with the divine help and integrate the true spirit of Islam in such a way that no one would be able to change the essence of the religion till the very end.   Therefore Imam Husain a.s. is the protector of Islam.

In a revolution, there is a reversal of direction to revolve and go back into its original form leading to a radical and complete change.  Imam Husain a.s. unfolded a new era in Islam by his unique sacrifice and clearly distinguished the truth from falsehood in the shadow of the Karbala Revolution.

The battle of Karbala that took place in the month of Muharram and subsequent events exposed the tyrants whose roots can be traced back to the infidels who had joined Islam either to save their own skin or in greed of bounty they expected from a prosperous religion.  The two groups, truth and falsehood, were clearly separated – the first group restored the religion of Prophet Mohammad sas, and the second group fed their own greed without a clue or understanding of the true spirit of Islam.  The two groups diverged even further with time as the sacrifice of Imam Husain a.s. and his companions was revealed to the world and the tyrants continued their tyranny on Ahlul Bayt a.s.  Imam Husain a.s. became an iconic figure not only for the true Muslims but also for the justice seekers who were seeking a true humanitarian as a role model.  The severed head of Imam Husain a.s., the savior of Islam, on the spear inspires every oppressed individual to raise his head and fight for his dignity.

If the question still remains:  Who won the battle of Karbala?  The victory is Imam Husain a.s. ’s because this one man revolution in the month of Muharram revived and brought back to life the true spirit of Islam complete with humanity as illustrated in the Holy Quran.  Imam Husain a.s.’s mission, which was to reawaken the spirit of Islam and rekindle the Islamic conscience that was nearing extinction by the conduct of Muslim rulers of his time, was accomplished perfectly.  The blood of Imam Husain a.s. and his companions keeps the lamp of Islam lighted as a means of guidance to all humanity, till eternity, to keep the spirit of freedom and refrain from surrendering the liberty of mind to evil ways [5].

Muharram is the month of display of patience, bravery, loyalty, heroism, faith, belief, trust, humanity and sacrifice. It is the month of Husain a.s.  It is a month of Abbas a.s., Ali Akbar a.s., Hurr a.s., Habeeb a.s., Ali Asghar a.s.  It is a month wherein the tyrants who were in power lost to the powerless and uprooted family of Prophet sas and their small group of devoted friends.

The sacrifice of Imam Husain a.s. started a new trend, the ritual of Majlis in the month of Muharram in the Imambargahs(the places where commemorating mourning assemblies or majalis are held) and Mosques.  This provided a unique opportunity of learning Imam Husain a.s.’s martyrdom and sacrifice in Karbala.  The respected orators convey the message of Imam Husain a.s. from the pulpits.  This must be made full use of in understanding the true meaning of Islam and the victory of chests, hands and necks over spears, swords and arrows.  We, the followers of Imam Husain a.s., do not need artillery to remain truthful and fight the Satan.  Falsehood will eventually be defeated by the truth and vanish with time so long as we have the courage to rise against the tyrant even when we are weak.  Imam Husain a.s. taught us to make sacrifices and remain firm if we are with the truth and not to give in to the Satans in our life.

We commemorate Imam Husain a.s.’s martyrdom in the month of Muharram.  We mourn by wearing black as a symbol of sorrow.  We experience the pain that Imam Husain a.s. and his family went through in saving the prestige of Islam.  We remember the sacrifice made by him to save Islam when it was in peril of extinction only a few years after our Prophet sas passed away.

The revolution in the month of Muharram is the cause of many revolutions we bring in our lives by taking strength from the martyrdom of Imam Husain a.s. because we do not consider Muharram to be a ritual to follow each year.  Rather, Muharram is a month in which the less powerful become more determined and muster strength to overcome the more powerful miscreants in their lives.  The enemy need not be an outsider, it could be your own ego that you learn to tame and get rid of in Muharram.  It could be your impatience and loss of focus that you need to learn to conquer.  It could be your temper and destructive nature that is causing harm to others and destroying your own self – this needs to be eliminated.

To my father who is a wonderful father, an adorable grandfather, and a devoted husband to my mother.