Righteousness is the Elixir of Eternal Happiness 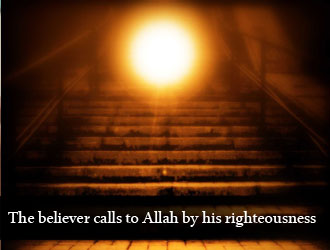 The Holy Quran a way of flourishing life

He has fashioned and spread this marvelous earth with vivid, beautiful effects and substance.  He has created attractive flora and fauna which vary from tiny to huge.  He has shaped incredible and bright matter like the petite flower that blooms its fragrant petals and all the fruits, and gardens of grapes, corn and palm.  The eye-catching birds that tweet and croon the hamd or praise of the Almighty Allah, these birds have beautiful beaks and wings.  The flowery, fragranced, vibrant textured petals of blossoms, that are of variant colors which grow on landscapes and on gray, blue and purple-headed mountains.  Along with these beautiful creations of Allah we also have the blazing sun that appears as a huge ball of fire and it blazes its sunlight in the morning with different shades that brighten the world and the sky and the lives of its inhabitants. It is He (Allah) who appointed the sun to give radiance, and the moon to give light.  The silvery rivulets and rivers running by and many more beautiful bounties of Allah we enjoy in this transient world.  Thus, we must always be grateful to Allah for all the bounties He has provided to us.

And nothing is this life of the world but a vain sport and a play; and verily the abode of the hereafter, is certainly the life; if they but know! [Holy Quran 29:64]

But for a believer all these beautiful boons give momentary happiness for his abode is not this transient world and his real destination is paradise which will give him/her eternal happiness.   The verse (Holy Quran 29:64) illustrates man’s awareness to the reality that the conception of the heavens, the earth and the other terrestrial and heavenly bodies including man himself, and their annihilation and demise, all are outside the human will and choices. We do not have any say in the working of Allah’s (s.w.t) Universe. There are certain conditions that apply to attain complete happiness in this journey of the transient world and the gist to attain this eternal happiness is to walk on the path of righteousness and on the will of Allah (s.w.t).

O my servants who believe! Surely My earth is vast, therefore Me alone should you serve. [Holy Quran 29:56]

One of the conditions to serve Allah by the righteous believers is to serve him always and whatever pressures come in their way of life, cruelty or harassment face them boldly and if the environment around is unfavorable then instead of bending down to the tyrannous people’s will move into the vast world of Allah (s.w.t) where you find peaceful and serene life.  The verse [Holy Quran 29:56] portrays that Allah (s.w.t) states to his believers never fritter your life in a miserable state of persecution.  If you are harassed in a place, then migrate to another place (as Prophet Mohammad (s.a.w.w) did he migrated from Mecca to Madina) where you will be protected and free.  We should not make a pretext of our inability to be faithful and righteous towards our Lord, the Almighty Allah, owing to our adverse environment.  One must share danger and evil and seek safety and good.  Duty to God should be our utmost priority and we must be prepared even for an exile.  The instruction is clear that the attachment to a particular place should not make us yield to any authority other than Allah (s.w.t).

And (as for) those who strive hard for Us, We will most certainly guide them in our ways; and Allah is most surely with the doers of good. [Holy Quran 29:69]

The next condition to serve Allah (s.w.t) is to serve his creation and try to do good for others.  Help them out through charity.  The virtuous people who serve the Almighty, Omniscient and Omnipotent creator, Allah (s.w.t) sincerely and wholeheartedly for those people He (Allah) promises His guidance towards good.  The Verse [Holy Quran 29:69] states that the Divine Allah (s.w.t) is forever with those who do good to others.  This is the most promising assurance for those who sincerely strive in the Way of the Lord.

And when your Lord made it known: If you are grateful, I would certainly give to you more, and if you are ungrateful, my chastisement is truly severe [Holy Quran 14:7]

The subsequent condition which we should pursue is to be thankful and grateful to Allah (s.w.t) in all circumstances for all the boons and banes of our lives. For when you thank Him and be grateful to Him he promises you more bounties. The verse [14:7] of Holy Quran, states that Gratitude increases the blessings and bounties and ingratitude takes them away and invites chastisement and calamities.

Allah (s.w.t) from time to time (s.w.t) has sent prophets on this beautiful earth to guide us.  By the guidance of these prophets we should follow the path of truth and righteousness. These prophets were sent to all communities and nations, all the time and through ages starting from the first man on earth Hazrat Adam (a.s) till the last and final messenger, the seal of Prophets, Prophet Mohammad-e-Mustafa (s.a.w.w).  In Surah Al-Ahzab [33:46] of Holy Quran, Allah (s.w.t) commands his last Messenger (s.a.w.w) to show us the right path as  Allah (s.w.t) has sent Prophet Mohammad (s.a.w.w) as a witness, Bearer of glad tidings and a Light giving Lamp, to invite mankind to God and to Glorify God each morning and evening.  The Holy Prophet (s.a.w.w) is defined by the metaphor, the sun which will illuminate the earth as a whole, incessantly until the end of the planet earth.  The Holy Prophet (s.a.w.w) is presented as the one who calls the people to the path of Allah(s.w.t), with His permission therefore, wherever He (s.a.w.w) has called any person to the Right Path, it was by Allah (s.w.t)’s command.  Whether it was taking along Ali Ibn Abi Talib (a.s) then a ten years old, in the beginning of this mission of invitation towards faith, or calling him at thirteen years of age to embark on the mission of His successorship at the ‘Dawate Zul-Asheera’, or taking along Hasan Ibn Ali (a.s) and Hussain Ibn Ali(a.s) in Mubahila when they were children of seven and eight years, will never be a comment against the order and the consent of Allah(s.w.t)

The Holy Prophet (s.a.w.w) taught righteousness and being truthful in our dealings, He (s.a.w.w) was the founder of the teachings of Quran and before his departure from this transient world He (s.a.w.w) declared in Hadith-e-Saqalain to his Ummah: “I leave behind me amidst you, Two Weighty (very important) things, the Book of God (the Holy Quran) and my Ahl Al-Bayt.  Should ye be attached to these two, never, never shall ye get astray, and never shall these Two be separated from one another until they meet me at ‘the Spring of ‘Kauthar’ (i. e., Paradise) . . . [Holy Quran Introduction 67a]

The wisdom of Quran and Ahl Al-Bayt (a.s) are from the Almighty Allah and it is the command of His benevolence and clemency that He ought to give assistance to mankind through his teachings for it is He who has created us as reasonable and rational beings.  The whole organization of the cosmos is executed underneath Allah’s authority and the whole lot in the earth and heavens is subject to Allah’s power alone.

Allah created the heavens and the earth with truth; most surely there is a sign in this for the believers.” [Holy Quran 29:44]

But there were many heathens who used to scorn Allah’s parables from the Holy Quran like the ‘parable of the spider’s web’.  It is said in the verse [29:44] of the Holy Quran that the parables cannot be understood but by the learned ones endowed with understanding. The universe with its entire incredible and intriguing phenomenon shows the realities beyond the external senses. These people disbelieved the prophets though they were given clear proofs about the apostles. Everyone among them shall be made to see the actual consequence of his own evil which the individual could not visualize in this life. This proves that in the life hereafter the senses will be sharpened.   The Holy Prophet (s.a.w.w) says: “Men in the worldly life are in a dream, when they die then they are awake.” [Quran, Explanation pg.1196]

These are they who have bought the present life (of this world in exchange) for the life hereafter; so their punishment shall not be lightened nor shall they be helped [Holy Quran 2:86]

The verse [2:86] of Holy Quran is a reflection of the fate of those who forgot the hereafter and gave themselves up to earning their personal gains and the vain glory of this world and resorted even to usurping the rights of Ahl Al-Bayt (a.s.) i.e., Usurping the rights of Fatima Az-Zehra or inflicting heartless tyrannies and tortures upon Hussain Ibn Ali (a.s.), his family and his successive Imams, which when related even today move the world to tears.

Now surely the friends of Allah– they shall have no fear nor shall they grieve. [Holy Quran 10: 62-64]

The verse [10: 62-64] of the Holy Quran states that the friends of Allah will not have fear in this world and the hereafter.  They will not grieve and they will be guarded against evil because they have always served Allah and they were grateful, righteous and thankful to Allah.  For the friends of Allah will have glad tidings in the life in this world and in the hereafter; that is the word of Allah (s.w.t) that is a great achievement for them.  The virtuous i.e., those who love God always love death i.e., to get away from this life and to enter the blissful life awaiting them in the hereafter.  Everyone of the Holy Ahl Al Bayt (a.s) was ever prepared for death and loved it.  Ali (a.s) when he received the stroke from Ibn Muljim, on his head in the Mosque exclaimed ‘Fuztu-be-Rabbil’ Ka’ba.” By the Lord of Holy Ka’ba I have succeeded.

On the eve of the tenth of Moharram, Imam Hussain (a.s)’s nephew Qasim Ibn Hasan (a.s) came and asked Imam (a.s) whether his name was in the martyr’s list or not. Because Imam Hussain (a.s) had not read Qasim (a.s)’s name when reading out the martyr’s list.  Imam Hussain Ibn Ali (a.s) asked Qasim (a.s): How he viewed death. To which, Qasim (a.s) replied that death is as sweet as nectar to him.  These traditions of the Prophet (s.a.w.w) and his Ahl Al-Bayt (a.s) family define to us that death for a righteous person is as sweet as nectar and he/she is happy to embrace it.